On 27 July 2012, when the Olympic Cauldron was lit with much spectacle in London, it marked the end of an extremely tense and thrilling time for TECOSIM’s engineers. This is because the company, a specialist in Computer-Aided Engineering (CAE), was responsible for developing one of the most emblematic tools of the games: the Olympic torch. 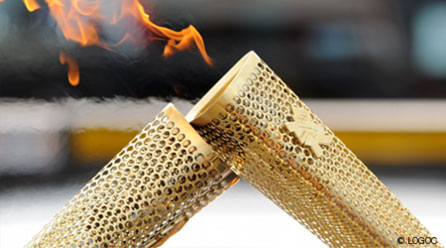 This unusual Project started in late 2010. At that time LOCOG (the London Organising Committee of the Olympic and Paralympic Games) was looking for a development partner who could bring to life the sensational design by renowned British designers Edward Barber and Jay Osgerby. The design duo had created a design with 8,000 holes on two concentric aluminium skins. The holes symbolise the 8,000 torch bearers carrying the torch through the United Kingdom for 70 days.

What’s more, a glimpse in the illuminant reveals the Olympic rings from any angle. And the triangular torch design represents the third time London has hosted the Olympic Games (after 1908 and 1948) as well as the motto ‘Citius, altius, fortius’ (Faster, Higher, Stronger).

The guidelines that LOCOG provided to engineering partner TECOSIM were clear and concise: the torch must not go out. At the same time, it must be ensured that the torch bearers are kept safe. The flame should be able to withstand Britain’s notorious weather conditions, with lots of wind and rain, as well as all manner of falls. Additional Requirements: the torch must be extremely robust because it will be transported by other means, such as horseback, by people in wheelchairs, by climbers, by boat, by hot-air balloon or by train.

To meet these requirements, the engineers first ran a computational fluid dynamics and combustion simulation to calculate the behaviour of the torch at temperatures between -5 ºC and +40 ºC as well as at wind speeds of up to 56 km/h and gusts of up to 80 km/h. Drop situations from heights of up to three metres were also simulated on the computer. Additional tests in the wind tunnel and real drop test trials with prototypes were also conducted to confirm the results from the computations. The development engineers also undertook analysis of material properties to identify suitable materials. In addition to this, they coordinated with the various partner firms to ensure a reliable series production.

In the end, the 800-gram torch, fitted out with a Bullfinch gas fuel burner for a butane/propane mix, met all of the requirements set. The flame could burn for up to 12 minutes at a height of between 250 and 400 mm. All of the TECOSIM engineers’ hard work paid off, as the torch was the most reliable produced so far.

27 July, the torch run reached its stunning finale in the Stratford Olympic Stadium. Seven young athletes lit 204 small petals: one for each participating nation. These were then joined into a single flame. In addition to the torch for the Olympic Games, TECOSIM also engineered the torch for the Paralympics and the supporting equipment for both relays, which included mini cauldrons, bus racks, bike and wheelchair adapters & the cradle for carrying the lantern on the aircraft from Greece to Great Britain.

“As a team we delivered Torch Relays, with associated icons that will stand the test of time and remain in people’s hearts and minds. We are very grateful to TECOSIM for the constant support throughout the whole process,” says Deborah Hale, Producer, Torch Relay at LOCOG.

Reception at Windsor Castle
“Even Queen Elizabeth II herself enquired about our work. Shortly before the opening ceremonies, we were invited to a reception for the Queen of England at Windsor Castle,” touts Stuart Hawker, Managing Director at TECOSIM Technical Simulation Ltd., Great Britain. “We want to participate in more tenders for future Olympic games and other major sporting events.”

We use cookies to give you the best possible user experience. If you continue browsing the site, you consent to our use of cookies. More